Isn’t it time you called into Milton Keynes Museum? 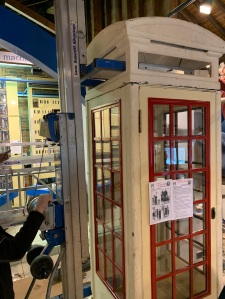 Milton Keynes Museum has just taken delivery of a very special acquisition – and this one is definitely something to call home about!

The Wolverton-based history hub has introduced an incredibly rare K3 telephone kiosk to its extensive phone collection in The Connected Earth Gallery.

The kiosks were designed by Sir Giles Gilbert Scott and introduced in 1929. By 1935, 12,000 K3s had been installed across the country. They predate the red cast iron kiosks and were made of reinforced concrete.

Only four other examples of the structures are known to still be in existence in the UK.
One is in Scotland and the others are at the Science Museum, at London Zoo and at Bromsgrove Museum.

Scott’s distinctive red phone boxes have since become known as icons of British culture, but though the window frames of the K3 are painted red, the remaining surfaces of this early example are finished in cream stipple-paint.

Sadly, the boxes were fragile; many disintegrated over time, and others were damaged during transportation.

“This is an incredibly important addition to the museum, and we are thrilled to have one in our care.

“Dismantling, transporting and installing it was a real responsibility for Graham Harris and his maintenance team. They knew only too well how many had been damaged when they were moved,” said Milton Keynes Museum director Bill Griffiths.

“The phone box is such a symbolic part of British history. We are privileged to have the K3 here at the museum where it is already proving a big hit with visitors – although our telephone team are still installing the equipment.”

The K3 joins a wealth of old telephones in The Connected Earth Gallery. Visitors can enjoy playing at being a switchboard operator, can learn to send and receive morse code and visit the police phone box.

The museum opens on Saturday and Sunday only, until February 16, opening during 11am-4.30pm.

Standard admission prices apply – which will give you FREE entry for the following 12 months; adults £10, child £7, concessions £8. A family ticket (admitting two adults and up to four children) is £30.

More information about forthcoming events can be found on the website http://www.mkmuseum.org.uk