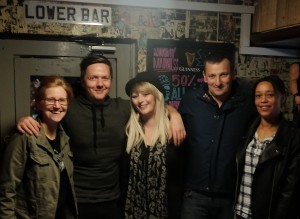 Well, last month was a joy to behold, as I got to combine two of my favourite things at once… music and food, courtesy of MK11 Live Music Venue and Sports Bar.

Opened in October 2013, MK11 has grown organically into a venue that caters for all walks of life, to those with many varied interests. Primarily a live music destination, the owners Marc and Simon have worked hard to also attract punters that enjoy food and drink festivals, live televised sports, comedy nights, indoor vaping (in the dedicated vape room) and pool.

A few weeks ago, I was excited to learn of the launch of its new food menu, and when we went to check it out it happened to be a Tuesday, which is the night of the venue’s weekly Open Mic night too… RESULT!

Arriving early with my fella and our friends, we grabbed a table inbetween the stage and the bar and were spoilt for choice with the new menu offer, ranging from burgers, chicken wings, sharing platters and sides.

Oh, and if plant-based is your thing (as it is mine), MK11 also has an extensive vegan menu with faux meats and vegetable based starters, mains and sides to tempt your taste buds.

While waiting for the food, I sought out Dale Luke Parker, Jim Reece and Mark Irwin, who are the organisers behind MK11 Open Mic and Jam Sessions, as I wanted to find out more about the weekly event.

Catching up with Dale and Jim, I learned that the guys had been running the Jam Night since July of last year and it was proving to be a great success, as Jim elaborated; “The three of us are professional musicians and have been active in the local scene since the days of MK’s only music venue at the time, The Pitz! We’re hugely passionate about local music and giving artists a platform to network, hone their skills and play to an appreciative crowd.”

And an appreciative crowd was certainly there that night, all seated and eager for the music to begin!

“We’re one big family!” Dale added, “People of all ages attend each week and all are welcome. Whether you’re a singer, or a musician, the stage can be solely yours, or we can match you up with others and with the full backline provided, everything’s ready for you and good to go!”

It’s not just purely about rock, or acoustic music though, as Jim elaborated: “We have rappers, spoken word artists and poets too. We encourage people to get up onstage and be creative.”

Which is obviously exciting to hear! Talking of exciting, I was then called away as the food had arrived. Waiting at the table was a veritable feast, which looked appetising and smelt amazing… time to dig in!

Real care is taken with the food at MK11 and the abundance of choice will definitely appeal to all tastes. Simple, home-cooked food, bursting with flavour is what we expected and we weren’t disappointed.

As the music started, we got stuck into the grub, with my friend Marey also tucking into a vegan burger, despite the fact that she isn’t vegan. “It just sounded really delicious!” she mused. And yes it was, I can concur!

My partner Don (did I mention he’s a chef?) was equally impressed by his meaty burger, and said it was ‘fully loaded’ with bacon, cheese, a hash brown and lovely sauces, packed into a fresh brioche bun.

My mate Nick practically inhaled his pulled pork taco, so I acknowledged that as a good review!

By the time we’d finished our great food, the music was in full swing and I was impressed to see a young lad up onstage. He was playing bass with well-known local artist Alex Wesley and other musicians, and I knew I had to chat with him after his set.

I introduced myself to the intrepid bassist, who told me his name was Kyle Seymour-Griffiths, aged just 12-years-old. A regular to the Jam Night, Kyle attends as often as possible, with his dad Gary.

Kyle’s usually playing early, as he’s got school the next day! I wanted to know what he liked most about Tuesdays at MK11.

“I’ve been playing music since I was 8-years-old,” Kyle informed me. “I had music lessons, then saved up for my first bass guitar when I was 11. I just love coming here and being onstage.”

Which is amazing. “I feel really relaxed on stage,” Kyle smiled, “I want to be in a band when I’m older and coming here means I meet and collaborate with some brilliant musicians, plus I get to play the kind of music that I really love.”

Which I guess perfectly sums up the earlier words of Jim and Dale, the Jam Night is “one big family”, encouraging and supporting local talent.

With our bellies full of scrummy food and our ears ringing from all the amazing music, it was time to call it a night. But with this event taking place every Tuesday at 7.30pm, we’ve certainly no excuse to not make it a regular date in the diary.

This feature was published in the November 2019 issue of Celebrate:MK lifestyle magazine. Read the full magazine above or by clicking on this link.