The city’s oldest basketball club has more than 270 players – and they want more for the new season. 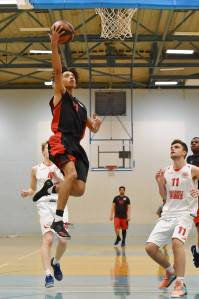 MK Scorpions Basketball Club is the oldest, largest and fastest growing community basketball club in Milton Keynes, with over 270 registered players aged from 4 to 64!

And the great news is that they want YOU to come and join in with the fun in the new 201920 season, which begins on the weekend of September 14 & 15.

Peter said: “Our philosophy is ‘Basketball For All’ – we offer boys, girls and adults the opportunity to get involved, to get fit, to make new friends, to learn fundamental basketball skills and to play in a team environment, all under the supervision of our team of coaches.

“All our coaches are volunteers, DBS checked and registered with Milton Keynes Council, and have also attended Safeguarding training.

“Some players just want to get fitter and train, which is absolutely fine. For the more competitive, we run our own regular interclub matches between same age groups, often inviting other basketball clubs to join us.”

This season also sees the expansion of the club’s Shooting Stars skills programme into local primary and secondary schools throughout Milton Keynes, supported by MK Community Foundation, offering coaching sessions before school, lunchtimes and after school.

If your school would like to be involved, you can contact Peter for more details. He added: “Above all, we are a community basketball club offering basketball for all – we invite you and your family to join our growing basketball community, and look forward to seeing many more new faces this coming season.”

First session FREE when you mention Celebrate:MK! Email pete@mkscorpionsbasketball.club or call him on 07940 279325.

This feature was published in the September 2019 issue of Celebrate:MK lifestyle magazine. Read the full magazine above or by clicking on this link.