Bletchley boxer Connor Wright is set for the biggest fight of his life on May 18 after landing a spot on the undercard of Billy Joe Saunders’ world title fight live on BT Sport, writes Luke Walsh. 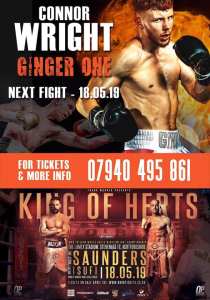 The 22-year-old middleweight, who sells houses at Thomas Connolly Estate Agents in the day, is looking for his eighth straight pro boxing win on the night at Stevenage’s Lamex Stadium in an event promoted by Frank Warren.

Connor said: “When my manager Mervyn Turner told me I was on the card I was shocked and I didn’t listen to anything else he said! I felt like I was floating for a while.

“This is my time to shine on the big stage. I told everyone I was on a mission to put Milton Keynes on the map and I wasn’t lying – I will be making it 8-0 on the night.”

This feature was published in the May 2019 issue of Celebrate:MK lifestyle magazine. Read the full magazine above or by clicking on this link.