King Creature will give a whole new meaning to raising the roof on the 5 April 2019 with a once in a lifetime performance on top of Marshall Arena to celebrate Jim Marshall OBE. 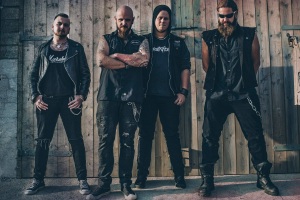 Since his passing on 5 April 2012, Marshall has celebrated Jim’s legacy of shaping the music landscape with ‘Father of Loud’ day.

Previous years have involved live music at Jim’s honorary pillar at the Milton Keynes Rose in Campbell Park. This year, Marshall Amplification are moving the live performance to the rooftop of Marshall Arena, MK.

This event is set to be a fitting tribute to the life of Jim and the legacy of generosity he instilled throughout Marshall Amplification.

10 years ago, Marshall Amplification received a letter from a mother asking for an amp for her son. That son was Dave Evans and now he plays guitar in King Creature.

Marshall Records band, King Creature, are set to perform at this public event at 3.30pm on the 5 April 2019.