The Scene Column: Merry Hell will be brought to town

Music reporter Vicki McCarthy has picked out three great local gigs to attend in March, ranging from folk-rock to punk and rave. 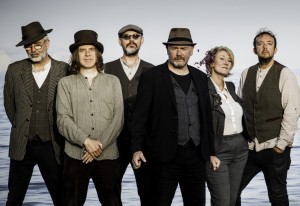 American author and lecturer Dan Millman once said, “Choice means saying no to one thing, so you can say yes to another.”

And this month I couldn’t agree more, as there are so many brilliant gigs taking place that I couldn’t pick just one to share with you! So here’s my round-up of March’s hot live music events…

I’m extremely excited that the amazing Merry Hell are playing on our doorstep this month.

Winning awards last year for Best Band and Best Live Act, they recently released their fifth album ‘Anthems to the Wind’ and are looking forward to a busy 2019, including this gig in Silverstone.

Having had the pleasure of seeing this slick, folk-rock ensemble play live three times already, I know to expect a show bringing foot-stomping energy, an enthusiastic audience, complete with intelligent and moving lyrics that often bring a tear to the eye, my own included!

Tickets are only available in advance, so snap yours up soon (merryhell.co.uk).

Modestly describing themselves as ‘Milton Keynes legends and reprobates’, Lågërshøp will be bringing their brand of aggravated, spluttering foul language, shouted over driven, anthemic state-side punk rock riffs… in a nutshell!

On the night, they will be joined by Call Me Malcolm, who are a five-piece skapunk band from London, plus further support comes from another ska-punk outfit, Essexbased The Jellycats. That’s a lot of great music for your five quid! (mk11kilnfarm.com).

Unit Nine is taking us back to the decade when I believe that music was at its best, with the venue hosting a 90s rave!

Taking place in an authentic setting of an ex-warehouse, Unit Nine will fling you right back to the glory days, with DJs spinning tunes across the sub-genres of House, Acid House, Disco, Garage, Techno, Classics, Trance and more.

To add further to the authentic feel, there’ll be an abundance of free glow sticks on the night, but be thankful that Unit Nine isn’t in the middle of a muddy field! (unitninemk.com).

Folk-rock, ska-punk and 90s rave all instore for this month. As they’re all on different weekends, you don’t have to say yes to one, and no to the others. In which case, see you at all three?

This feature was published in the March 2019 issue of Celebrate:MK lifestyle magazine. Read the full magazine above or by clicking on this link.