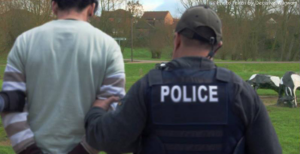 A man was escorted by border control officers out of Milton Keynes last night for not knowing where the concrete cows were.

When quizzed by detectives after a tip-off from a concerned neighbour, he seemed dumbfounded when asked the simple question about the location of our beloved stone bovine ambassadors.

“I knew he wasn’t local,” she said. “He doesn’t even refer to the shopping centre as the city centre.”

The nameless individual, Ted Chalet, failed immigration tests by MKExit. “Up in our run to leave the UK next year, we are checking that all of our residents are well aware of our rich history, diverse culture and are fiercely proud of MK,” said Mayor Constrinsby Thatch.

“God save our gracious roundabouts.”

The world’s first Zeppelin cathedral (Hindenburg II) took to circling the skies of MK on Saturday afternoon in a bombastic attempt to gain city status for the town.

Although Milton Keynes already has a ‘tree cathedral’, the council have finally accepted this isn’t a strong enough statement and have decided that a more grand gesture would gain the nation’s attention.

The cathedral was last seen in the early hours of Tuesday morning plummeting towards the Lakes Estate area with lack of balance and control. It is rumoured that due to the craft having only one driver he may have fallen asleep.

Musician Brian Eno has launched a new album comprising of 11 ambient soundscapes in dedication to the Beanhill housing estate.

We asked Brian, via fax, why he decided to choose such a questionable location for his latest work.

“I’ve always had an affiliation with the place as my aunt Val lives there on Wheatcroft Close,” he said.

Having had a sneak listen to the tracks, the music does really evoke the desperation and confusion of the area. On the final track there is even the recording of a drunk couple arguing outside the local shops.

The album is due to be released to Beanhill residents only on cassette.

This feature was published in the December 2018 issue of Celebrate:MK lifestyle magazine. Read the full magazine above or by clicking on this link.