Having clamped down on pretend news, the Prime Minister of America has now set sights and a waving finger at fake wildlife.

Donald Trump has warned Milton Keynes that if we don’t destroy our concrete cows then we should expect severe consequences.

The concrete dinosaur at Peartree Bridge has gone into hiding since the announcement by world leaders that Milton Keynes has been given 24 hours to answer or face missile attack.

Rumour on the redways is that he and the Leon School dinosaur have gone to stay with family in Scotland.

Trump has asked Theresa May to assist him in the matter, which of course she agreed to without question, such is our great and mutual relationship with the USA.

She said: “Those stone bovines are of great threat to our real cow community.” 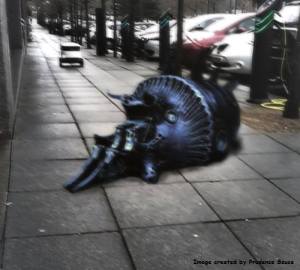 Star of the TV show Robot Wars and keen angler Matilda is to be sent to the streets of Milton Keynes to put our delivery bots through their paces.

Each robot will be chased and challenged to a one-toone duel with the boisterous mistress to test their agility and dedication to duty. 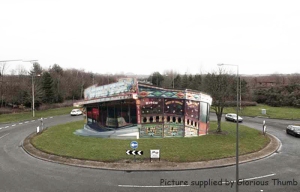 Several roundabouts across MK are to double up as entertainment attractions as part of an initiative to show the outside world that we can have fun too.

Despite health and safety fears, organisers feel an element of risk has to be allowed to change the face of MK.

“People will be able to get onto the roundabouts if they cross the road correctly,” said Councillor Beacon Whispers.

This column was published in the August 2018 issue of Celebrate:MK lifestyle magazine. Read the full magazine above or by clicking on this link.