Milton Keynes Museum in Wolverton is undergoing a £7.3million expansion, including two new galleries, to transform it into a national attraction. Richard Bateman, owner of award-winning creative agency, westfourstreet, spoke to the museum’s Director, Bill Griffiths, to find out about its history, expansion plans, 2018 events and lots more. 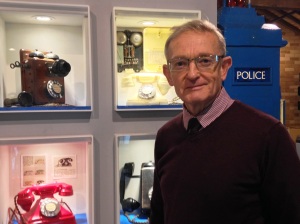 Milton Keynes has only just turned 51 years old so a museum here might come as a surprise to some, but our heritage stretches way back before 1967, doesn’t it?

Milton Keynes is no different. People passed up and down Watling Street, even before the Romans, one of the Eleanor’s Crosses was built at Stony and there are so many stories to tell. Founded in 1973, the museum suffered heartbreak in 1996 after a fire destroyed many treasured items. This brought with it revised plans.

How has the museum evolved over the past two decades?

Even before the fire the museum had submitted development plans – the fire destroyed half the museum and half the collection – and, in a way, the best as it was what we had on show.

When the museum moved onto site, the farm had other occupants – the Landscaping Department and the Writer and Artist in Residence – that is how the concrete cows came to be made on the farm.

So after the fire we could plan for the site – bring people in through the farmhouse, build the street of local shops and a new Hall of Transport. We rely heavily on volunteers. They all contribute to all aspects of running the museum.

A hugely popular destination for children and schools, how important is it for our heritage in MK to be passed down to our younger residents?

It helps give people an identity and a “sense of place” but it does more than that – it gives us all a shared heritage.

Some comes from the area we live in but some is brought in by the 80% of the residents that moved here. We can’t change the past but a knowledge and better understanding of the past might help us make the right decisions in the future.

There are grand plans in place here with the expansion taking place. With two massively impressive galleries being constructed, what can we expect to see?

The first gallery will allow us to display the rich archaeology that was discovered here against some of our important stories.

On the farm that is now the museum, the biggest Bronze/ Iron Age roundhouse in the country and Bancroft Roman Villa were discovered and, nearby, a work-box carried rare runic text.

These will be used as immersive back-drops to the finds. The other gallery will tell how the new town of Milton Keynes was planned, promoted and populated. We want to tell the people’s story and we will go on collecting and telling stories here.

Everyone has a story to tell and Living Archive are helping to collect them. Finally, we will show some of the ventures that make us what we are – Marshall Amplifiers, Red Bull, Niftylift, MK Dons, SMC and the Open University among others.

Back to the present day, which events in 2018 should we look out for?

Apart from the holiday activities, we start with the History Festival in May, then there is the Victorian Event in June and the 1940s in September. The full list is in our brochure or at http://www.mkmuseum.org.uk.

This column was published in the March 2018 issue of Celebrate:MK lifestyle magazine. Read the full magazine above or by clicking on this link.