A Horrible Halloween at Waddesdon Manor

Alicia Approved column: There was lots of fun to be had at Waddesdon Manor over half term. Alicia Babaee took her little boy along to check it out. 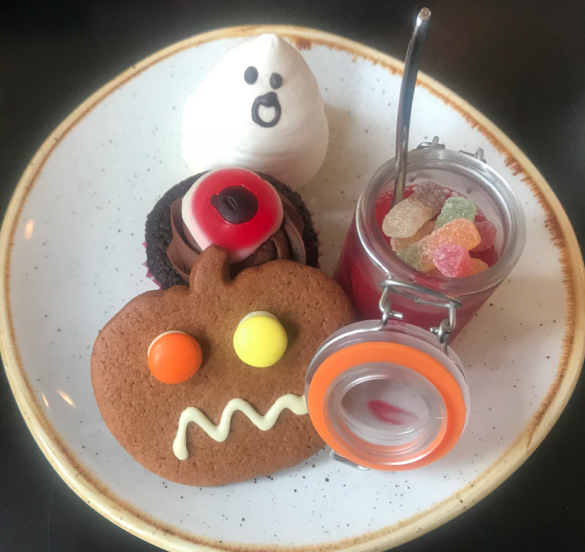 For fun, fresh air and a great family day out, Waddesdon’s got it nailed.

With stunning gardens, an incredible house and some of the best family events around, we should all feel lucky to live so close by.

When we were invited to their Horrible Halloween event – complete with spooky afternoon tea – we knew it had to be a big, fat ‘yes’!

Henry, three, donned his furry bat legs, giant bat wings and felt bat hat, and we were off. We made the spooky afternoon tea our first stop in the Manor restaurant – and it was fab.

We were a little surprised when the first course arrived as, although very delicious, it was just a ham and a cheese sandwich. Not very spooky! But once those were gobbled up by our friend the bat, the pièce de résistance arrived.

There was a pumpkin-shaped gingerbread biscuit, a meringue ghost, an eyeball chocolate cupcake and a pot of jelly with sugary worms crawling in it. Henry’s eyes were on stalks, he could not believe his luck!

The hubby and I ordered lunch too, and we had fish and chips, plus slow-cooked beef with cauliflower cheese, roast potatoes and bacon. Neither of us could decide between the two dishes so we ordered both and swapped half-way through. Both were great.

Then it was down to the courtyard where there was a whole world of Halloween fun to be had. For £2, we bought a little goody bag which had two counters in it which Henry could use to play two games. He played hoopla – throwing hoops onto giant witch’s hats, and smashing pumpkins – throwing beanbags at the pumpkins. Some practice required I think!

There were stands selling light-up candyfloss, tombola, raffles, live music, a photographer and all kinds of other entertainment.

We spent the rest of the afternoon in the park – which is absolutely brilliant! We could have spent longer.

On this trip we didn’t have time to go into the house, but we’ll be back at Christmas to enjoy that.

If you fancy taking your little ones for an afternoon tea, Waddesdon Manor will be doing a limited edition Paddington Bear afternoon tea from 11th November-2nd. You can book here.